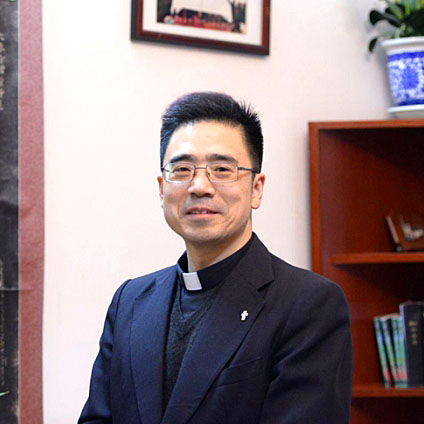 Aiming Wang (王艾明), Th.D., D.h.c. is a professor at Jinling Union Theological Seminary in Nanjing, China. He has a Doctor of Theology degree from the University of Basel in Basel, Switzerland, and a honorary doctorate from the University of Neuchâtel in Neuchâtel, Switzerland. Presently, he is one of the directors of the China Religious Society, chief editor of Jinling Theological Journal, deputy director of the Christian Council of Jiangsu Province, and deputy director of the Theological Education Committee of the China Christian Council.

“Beginning from about 2008, I came to the definite conclusion that Watchman Nee and Witness Lee are spiritual giants in the history of Chinese Christianity.”

During the ten-year period from 2002 to 2012, I continually studied and read through all of the writings of Watchman Nee and Witness Lee. I have gone over some of their more important writings several times. I have reflected on their writings and compared them systematically with the mainstream theological thoughts formulated by people such as St. Athanasius, St. Augustine, St. Thomas Aquinas, Luther, Calvin, Barth, and Ratzinger.

Beginning from about 2008, I came to the definite conclusion that Watchman Nee and Witness Lee—the founder and the inheritor, respectively, of the indigenous Chinese church, Christian Assembly (a.k.a. the local churches, Assembly Hall, Little Flock)—are spiritual giants in the history of Chinese Christianity.

From the standpoint of theology, the “local churches” founded by Watchman Nee are a unique development in Christianity in China. If we look at the local churches based on the three solas used by Calvin to summarize Luther’s principle of reformation, the local churches correspond exactly to the highest standard set forth by the Protestant church tradition. Hence, this perspective of historical theology accounts for the healthy growth in scope and impact that the local churches have enjoyed since they appeared on the scene. Witness Lee was the leading figure in the development of the local churches outside of China. At present the local churches can be described as the only indigenous Chinese church that has had an international impact as far as world mission is concerned. Surrounding Watchman Nee, Witness Lee, and the local churches founded and developed by them, there have been many misunderstandings and slanders. If we trace these back to their origin and root cause, we, the mainstream Christian denominations, bear an inescapable responsibility to clarify facts and to correct bias.

If the departments in the Chinese government overseeing religious affairs are to truly maintain our citizens’ right to freedom of religious belief as defined by the Constitution, they should restore the reputation of Watchman Nee as soon as possible. At least, they should allow the seminaries under the governance of the two councils [Three-Self Patriotic Movement and China Christian Council] to regard Watchman Nee as one of the fathers in Chinese Christian history and to study his teachings. His voluminous writings should be allowed to be published openly and studied in China.

It is my view that the Chinese Christian church tradition founded and developed by Watchman Nee and Witness Lee (a.k.a. the local churches, Christian Assembly, Assembly Hall, and Little Flock), as a wondrous flowering of the Christian faith in the landscape of the gospel in China, will become the driving force of a spiritual movement.